This is the Difference Between the Catholic and Orthodox Church

The Catholic and the Orthodox Church are two of the most prominent churches of the world whose differences are more ideological than spiritual. Here, we enlist some of the basic differences in the teachings of these Churches. 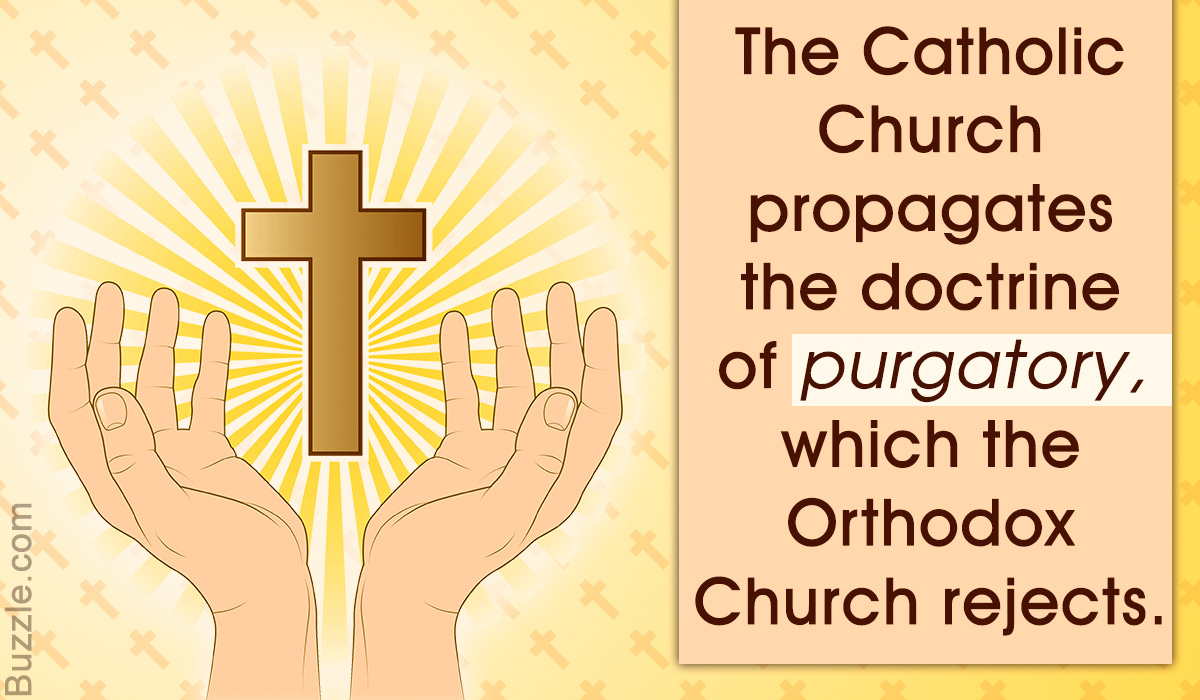 The Catholic and the Orthodox Church are two of the most prominent churches of the world whose differences are more ideological than spiritual. Here, we enlist some of the basic differences in the teachings of these Churches.

Two Faces of the Same Coin

The Catholic Church sees itself in much closer partial communion with the Orthodox Church than with the Protestants.

Over the past 2,000-odd years, since the establishment of the Church, the Christian community has undergone a lot of schisms at various stages. The Church stood united in spite of its many internal differences till the Council of Chalcedon in 451 A.D. It was at this time that the first schism came about owing to the differences between the church factions about the nature of Jesus. While some insisted that Christ is in two natures―divine and human, another group under the leadership of Pope Dioscorus I, the Patriarch of Alexandria strongly opposed this definition. This faction maintained that Jesus is of two natures. This group, later, went on to form the Oriental Orthodox Church.

In 1054 A.D., the differences between the factions of the Church were much greater, and were mainly related to certain teachings of the Catholic faction, and the claims of papal supremacy which the Eastern Orthodox Church faction strongly opposed. This resulted in the Great Schism which led to the formation of the Eastern Orthodox and Catholic Church.

Ever since, the Church leaders of both the Catholic and Orthodox Church have tried real hard to unify these two major Christian factions, and there are plenty of ongoing efforts as well. Although the entire Christian community is united when it comes to faith, a lot of differences exist in the teachings and practices of the West (Catholic Church) and that of the East (Orthodox Church). While we could have an entire library of books talking about the differences between the two Churches, here’s a look at the basic differences between the Catholic and Orthodox Church.

Catholic Church – The Church regards the Pope, seated on the Apostolic Throne of St. Peter, as the head of the church, and the one supreme authority. The other bishops are subordinates to the Pope, who is also called the Supreme Pontiff. The Church also propagates the dogma of papal infallibility, which was defined in the First Vatican Council (1869 – 1870). This states that, in virtue of the promise of Jesus to Peter, the Pope is preserved from the possibility of error “when, in the exercise of his office as shepherd and teacher of all Christians, in virtue of his supreme apostolic authority, he defines a doctrine concerning faith or morals to be held by the whole Church”.

Orthodox Church – The various Orthodox churches are autocephalous, which means, they are independent of each other and their head bishops don’t report to any higher bishop. The Orthodox Church believes that the head of the universal Church is Jesus Christ, and the Patriarch or Catholicos of each church presides over its Episcopal Synod. The Patriarch or Catholicos is the administrative head but is at par with the rest of the bishops in spiritual terms. The Church believes that although the Patriarch or Catholicos is its administrative head, he is still human and is bound to err. The Church, therefore, entrusts the Synod constituting all the bishops and select clergy, inspired by the Holy Spirit, to take decisions on matters of faith.

Catholic Church – The Church believes in the concept of ‘Original Sin’ which was caused by Adam’s Fall in the Garden of Eden. According to this belief, all humans are born sinners. The Church propagates the ‘dogma of the Immaculate Conception of the Virgin Mary.’ The Bull Ineffabilis Deus defined by Pope Pius IX, in 1854, states that ‘from the first instant of her conception, the Blessed Virgin Mary was, by a most singular grace and privilege of Almighty God, and in view of the merits of Jesus Christ, the Redeemer of the human race, preserved from all stain of Original Sin. It is a doctrine revealed by God, and therefore, to be firmly and steadfastly believed by all the faithful.’

Orthodox Church – The Church does not believe in the concept of Original Sin. It instead believes that as a result of Adam’s sin, mankind goes through the death of the body. The Church considers Mother Mary to be the first among the Saints, and much like the Catholic Church, seeks her intercessory prayers. The Church believes that the Mother of God was filled with the Holy Spirit for the immaculate conception of Christ. The Church further believes that Jesus Christ came for the redemption of sins of all mankind including the Virgin Mother Mary. After the Pentecost, Mother Mary is also believed to have received the Holy Spirit, and was later assumed into heaven.

Orthodox Church – Much like the Catholic Church, the Orthodox Church too practices infant baptism. The child is consecrated with the Holy Chrism (myrrh) during baptism. The infant usually receives the Holy Eucharist within a couple of days after baptism, usually the next time the Holy Eucharist is celebrated in church. So, every Orthodox Christian becomes a part of the Church almost immediately after baptism and receives two other Sacraments―Chrismation and Holy Eucharist―around the same time. These three, together, are usually called the Sacraments of Initiation. The Sacrament of Confession usually comes in at a stage where the baptized individual is mature enough to discern between good and evil.

Catholic Church – According to the Catechism of the Catholic Church 1030 – 1031, “All who die in God’s grace and friendship, but still imperfectly purified, are indeed assured of their eternal salvation; but after death, they undergo purification, so as to achieve the holiness necessary to enter the joy of heaven.”

The Church gives the name purgatory to this final purification of the elect, which is entirely different from the punishment of the damned. The Church formulated her doctrine of faith on purgatory especially at the Councils of Florence and Trent. The tradition of the Church, by reference to certain texts of scripture, speaks of a cleansing fire:

“As for certain lesser faults, we must believe that, before the Final Judgment, there is a purifying fire. He who is truth says that whoever utters blasphemy against the Holy Spirit will be pardoned neither in this age nor in the age to come. From this sentence we understand that certain offenses can be forgiven in this age, but certain others in the age to come.”

Essentially, the Church considers purgatory as a place of purification before one enters the Kingdom of Heaven. This is the place where we undergo individual judgment just after death and are rewarded or punished for our deeds in our lifetime. Later, during the Second Coming of Christ, we all will be separated as the sheep are separated from the goats (Matthews 25:32). The Church believes that it is in between these two judgments that our soul is purified of our sins.

Orthodox Church – The Orthodox Church does not believe in the doctrine of purgatory. The Church believes that after death, we are in a state of waiting, sometimes referred to as Hades, where we await Final Judgment. It is during the Final Judgment that the good people would be reunited with Christ and inherit eternal life, while the evil ones would be banished into Hell for all eternity. Much like the Catholic Church, Orthodoxy also believes in the intercession of the dead.

This is perhaps one of the most publicized differences between the two Churches, and is one major factor that eventually led to the Great Schism. Filioque is a Latin term which means ‘and (from) the Son.’ This is the phrase that was included in the Nicene-Constantinopolitan Creed used commonly by the Church since the 6th century A.D. It was formally accepted by the Roman Catholic Church in 1014 A.D., while the Orthodox Church rejected it altogether. The Catholic version of the Creed states that the Spirit ‘proceeds from the Father and the Son’, while the Orthodox version puts it as ‘proceeds from the Father’.

These are just some of the many ideological and cultural differences between the two great Churches of the world. You can read more about the Orthodox Church and its practices here. In spite of our many differences, all the Christians of the world stand united in proclaiming our faith in our Lord, Jesus. Here’s hoping that we put our differences aside and stand together in glorifying God. Amen.