14 Most Famous Statues of Jesus Around the World

Statues of Jesus Christ can be found all around the world, many of which are considered to be religious sites by the Christian community. However, some of these statues have gained more fame than others. Here are the 14 most famous Jesus statues in the world.

Home / Uncategorized / 14 Most Famous Statues of Jesus Around the World 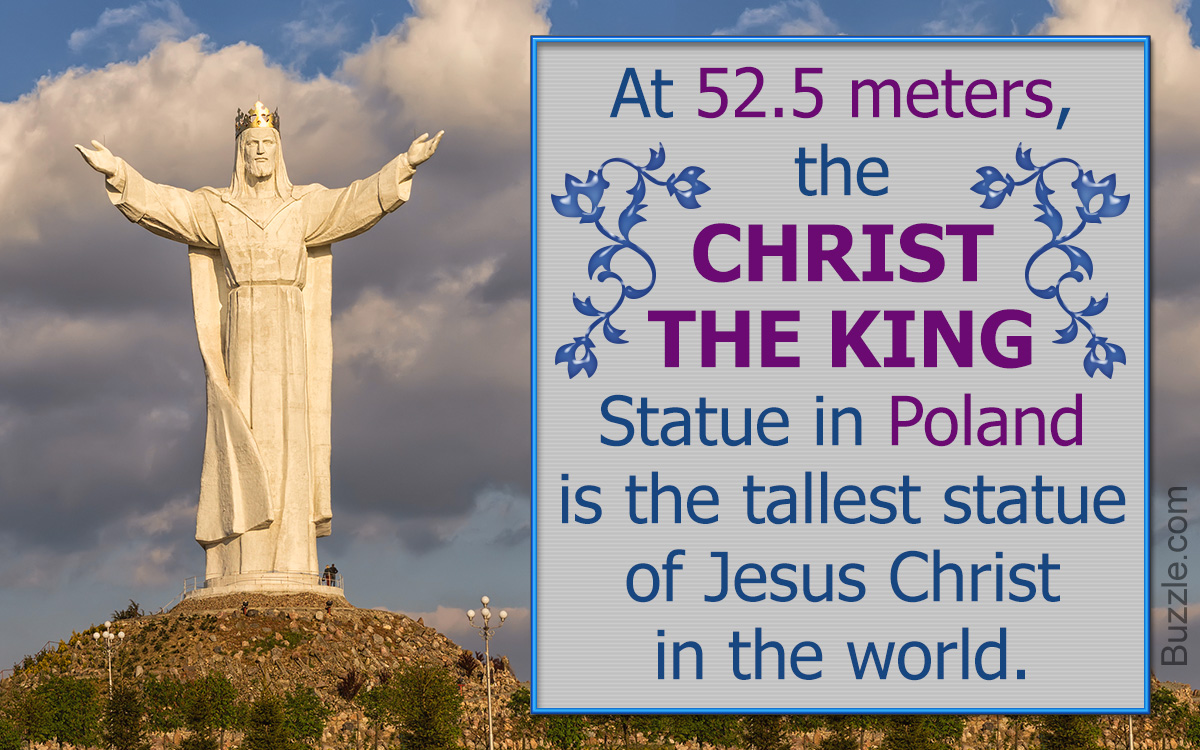 Statues of Jesus Christ can be found all around the world, many of which are considered to be religious sites by the Christian community. However, some of these statues have gained more fame than others. Here are the 14 most famous Jesus statues in the world. 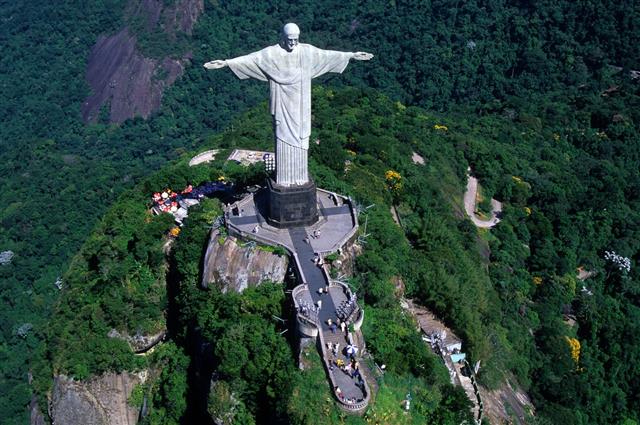 The Christ the Redeemer statue in Rio de Janeiro, Brazil, has a number of lightning rods on its head, arms, and hands, to protect it from lightning strikes, which usually hit the monument several times each summer.

Christianity is the largest religion in the world, with more than 2 billion followers from all corners of the globe. As a result, spectacular churches, cathedrals, and monuments, including some really impressive statues of Jesus Christ, have been built across the world by devout Christians.

While the statues of Jesus inside churches an cathedrals are usually life-size, outdoor statues are built to be huge in size, in an effort to convey the massive presence of this godly figure, as well as the amount of faith the people had to create such amazing religious monuments. As you will see in the list here, the design of the statues are varied, depicting the culture of the people in various parts of the world, and the way they view Jesus.

Christ of the Abyss, Mediterranean Sea

The original Christ of the Abyss was submerged in the Mediterranean sea in 1954, near the Italian Riviera. Following this, similar bronze replicas were placed in Grenada in 1961, and near Key Largo in 1965. It is a real treat to look at, for people who are snorkeling or scuba diving in the area.

This statue was a gift from the Indonesian government to the people of East Timor. Since 2002, the Cristo Rei has become an important tourist attraction of the newly independent nation. Unlike other entries in this list, Cristo Rei is made from copper, and not stone. It consists of 27 pieces which were made in Indonesia and assembled together at the final site in East Timor.

This graceful statue of Jesus is known by the locals as Cristo Redentore. It was financed by an entrepreneur Stefano Rivetti, and made from white and blue-gray marble, before being opened to the public in 1965. It is located on the Monte San Biagio hill, overlooking the town of Maratea. 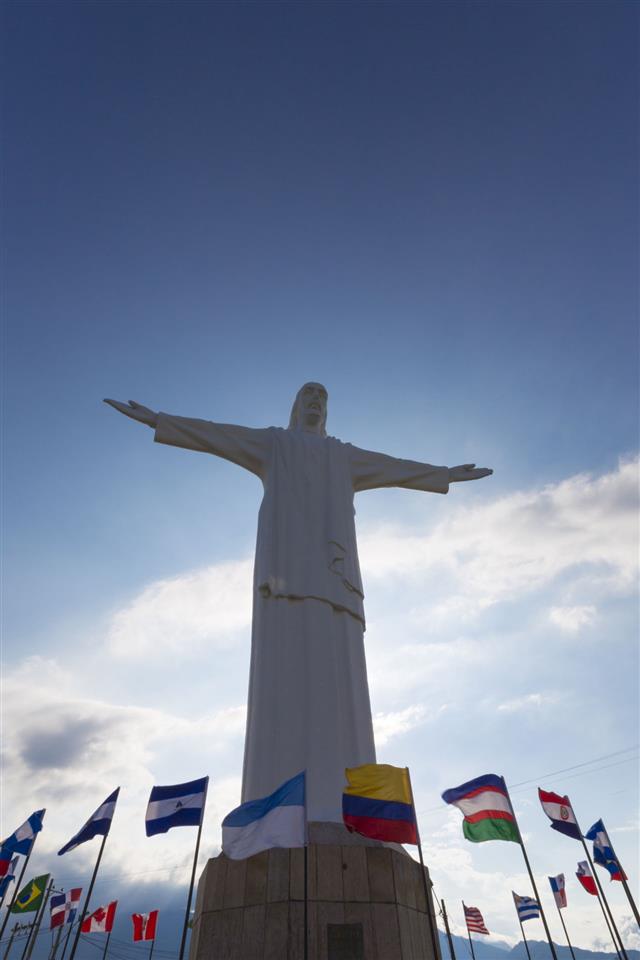 Located on top of a large mountain in the city of Cali in Colombia, the Cristo Rey was built in 1953. Visitors here are also treated to panoramic views of the city. The climb to the top is only for people who are fit, as the mountain is steep. Others will have to hire a cab if they desire to reach the top.

This large statue of Jesus Christ was built on the densely forested Mount Nho in Vũng Tàu, Vietnam, by the Vietnam Catholic Association, over a period of 20 years from 1974 – 1993. It is 36 meters (118 feet high), including the pedestal, which one can climb using an internal staircase to reach the top of the granite and concrete monument, and see some spectacular views. The metallic halo rays near the head are not just for decoration, but they also act as lightning rods.

Known locally as Cristo Rei, this statue was built between the years 1959 – 1969 in Lisbon, Portugal, after the Cardinal Patriarch of the city visited Brazil and was inspired by the Christ the Redeemer statue of Rio. It was a symbol of gratitude by the Portuguese, for being largely untroubled during the Second World War. The statue is 92 feet tall, standing on a 269-feet tall pedestal on a cliff over the Tagus river, which makes it the tallest monument of Jesus in the world.

Christ of the Mercy, Nicaragua 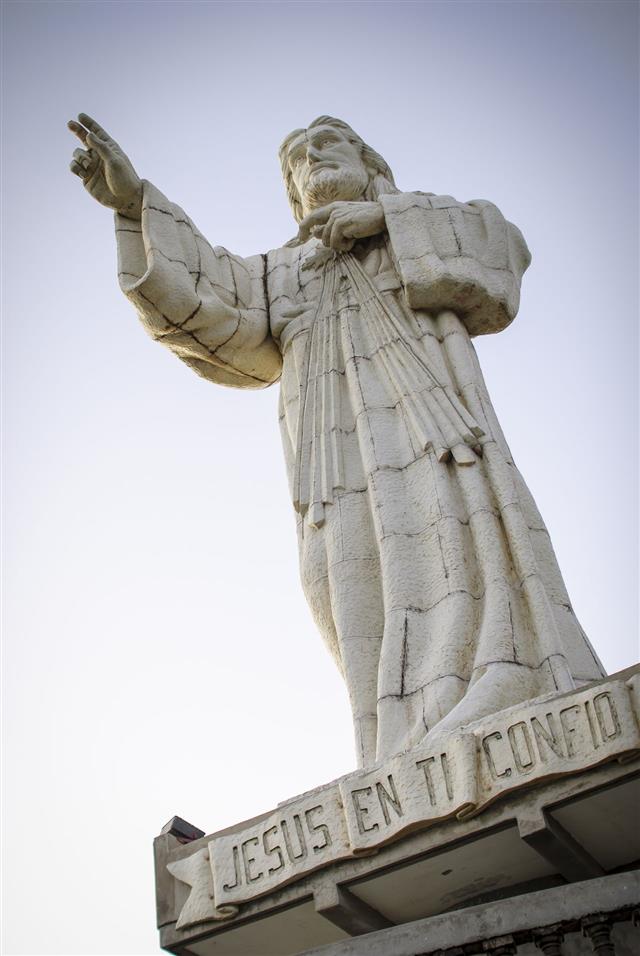 At a height of 26 meters, this is the largest statue of Jesus Christ in Central America. The Christ of the Mercy is located at the northern part of the bay in the city of San Juan del Sur, Nicaragua. The statue was commissioned by a local businessman Erwin Gonzalez, and although it is on private land, the public can visit with authorization.

Overall, this is the largest and heaviest Jesus statue in the world, at a height of 40 meters (132 feet), and weighing 2,200 tons. It is also the highest statue of Jesus above sea level. The Cristo de la Concordia (Christ of Peace) is located on top of the San Pedro hill in the city of Cochabamba. To reach the statue, one has to climb 2,000 steps up the hill. However, if this seems to be a bit too much, a cable car service is also available. One can also climb to the top of the statue on Sundays, by walking up an additional 1400 stairs. 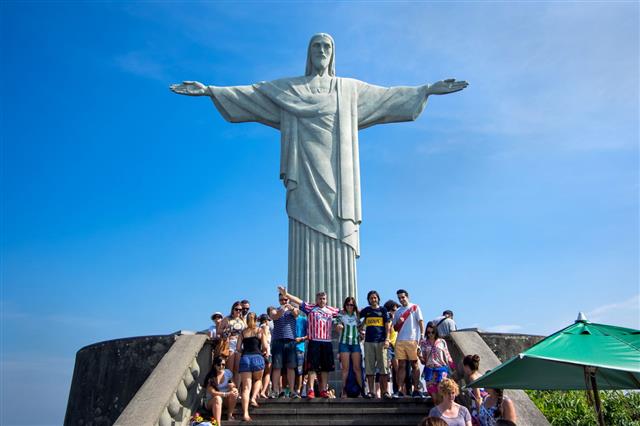 statue in Rio de Janeiro, Brazil, is one of the seven wonders, and is also the 5th biggest statue of Jesus Christ in the world, with a height of 30 meters (98 feet – not including its 8-meter or 26-feet pedestal). The arms of the statue are spread wide, spanning a distance of 28 meters (92 feet). Built during the years 1926 and 1931, this statue of Jesus in Brazil has become an icon for the city of Rio de Janeiro, and is arguably the country’s most famous monument.

Monument to the Divine Savior of the World, El Salvador

Built in the San Salvador city of El Salvador, in 1942, this statue of Christ shows Jesus standing on top of the world, which is placed on a tall granite and concrete base. The structure suffered some damage in 1986 due to an earthquake. It was later repainted and restored in 2010.

Christ of the Sacred Heart, Mexico

Located six miles from the city of Rosarito in Mexico, this statue is made of steel and fiberglass. It is unique in this list, as it is the only large statue of Jesus Christ in the world made in full color, while the others are either white or monochrome.

Also known by the name Christ the Redeemer, the Cristo della Minerva is one of the most unique and oldest statues of Christ, sculpted in marble by the legendary artist Michaelangelo in 1521, for the Santa Maria sopra Minerva church in Rome, Italy. It is extremely famous across the world, despite its relatively small size of just 81 inches.

This statue of Christ can be found on the outskirts of the city of Palencia in Spain. It was built in 1931 by the sculptor Victorio Macho, who was buried at the statue’s feet after his death. It was designed to appear thin and vertical, as the sculptor desired the statue to be viewed from directly below. 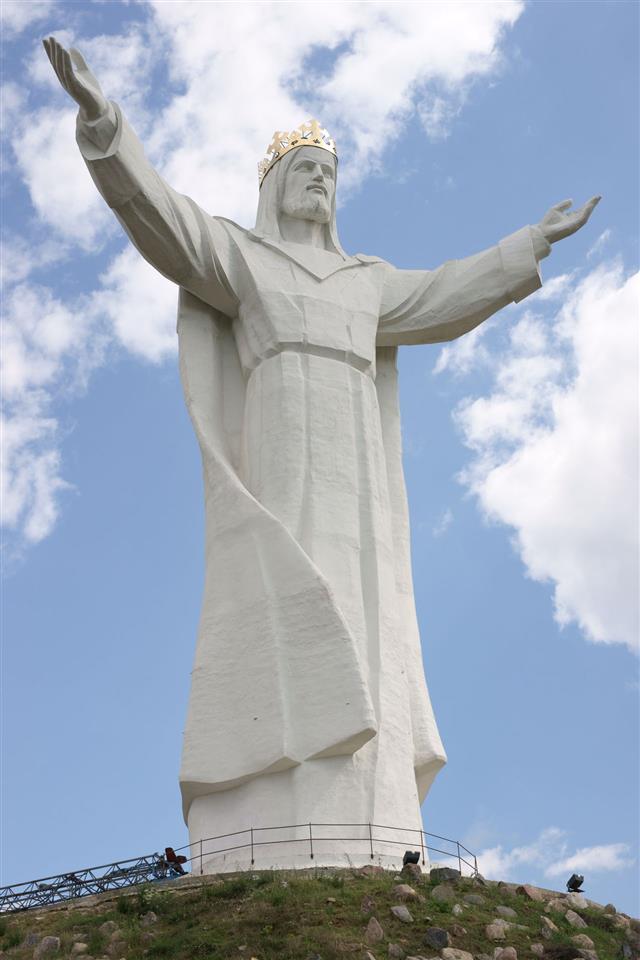 Completed in 2010, this statue in Świebodzin, Poland, is also the tallest statue of Jesus in the world (inclusive of the mound and crown), at a height of 52.5 meters (172 feet). It was built by a Polish priest Sylwester Zawadski, with a cost of over USD 1.4 million of donations from the locals.

These great monuments of Jesus Christ are a few magnificent examples of the efforts of engineers, laborers, visionaries, and patrons, to pay homage to a central character of their faith, in a magnitude that befits a king.