Have You Ever Wondered What the Sideways Cross Necklace Means?

A sideways cross necklace is the latest trend in religious jewelry that has hit the market and is getting popular like wildfire! All credit goes to the famous celebrities who wore it, making this religious necklace more like a fashion statement! However, is this design just a funky adaptation to the traditional upright cross, or is there an actual meaning of the sideways cross?

Home / Uncategorized / Have You Ever Wondered What the Sideways Cross Necklace Means? 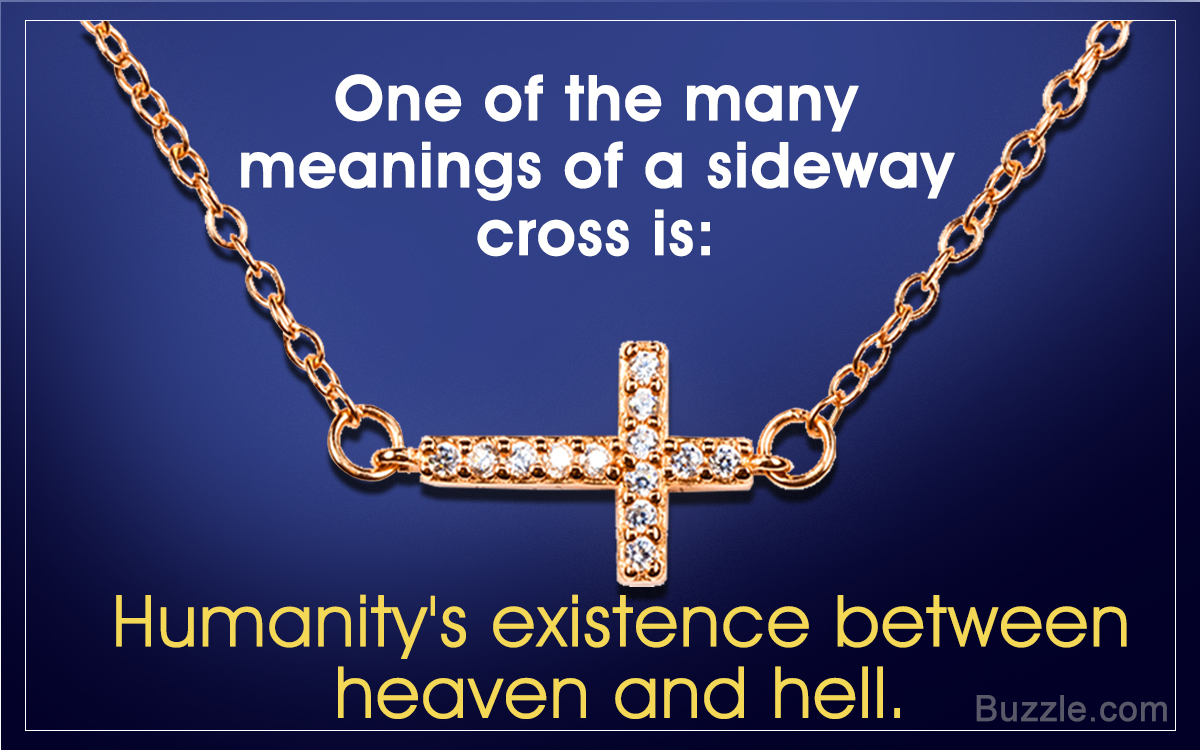 A sideways cross necklace is the latest trend in religious jewelry that has hit the market and is getting popular like wildfire! All credit goes to the famous celebrities who wore it, making this religious necklace more like a fashion statement! However, is this design just a funky adaptation to the traditional upright cross, or is there an actual meaning of the sideways cross?

Most flags of Scandinavia bear the Nordic Cross, which is another name for the sideways cross. Therefore, it is also known as the Scandinavian cross. This is a symbol of honor, patriotism, and of course, Christianity.

While the existence of this design has been there since time immemorial, the emergence of the sideways cross being used in necklaces and bracelets is fairly new. It all began when some of our favorite celebrities―Jennifer Lopez, Selena Gomez, Miley Cyrus, Vanessa Hudgens, to name a few―started wearing this offbeat version of the traditionally worn upright cross, setting a trend that is only spreading out with time! While a lot of people are trying to get their hands on this version of the religious symbol, many religious interpreters have a mixed opinion when it comes to this sign’s symbolism and meaning.

We believe that a symbol is confined to only those interpretations that you relate with. Similarly, different sources have different meanings linked to a cross, which still is a cross, but only placed in a different way! The following section will brief you on the same.

What Does the Sideways Cross Necklace Represent?

The more you search, the more interpretations you will come across. Listed below are some of the common beliefs associated with this design. In fact, there is a mixture of negative and positive symbolism associated with the sideways cross. While some associate it with Christ, others consider it to be linked with Satanic practices. Nonetheless, we believe that it is still a cross, isn’t it?

Our favorite interpretation is the one where the symbol itself identifies with Jesus carrying the cross. If you notice carefully, Jesus didn’t carry the cross in an upright position, but in a slanting position, holding it sideways. For many, this symbol is a reminder of the sacrifice, pain, and humiliation our Lord had to endure to save us sinners. He died for our sins, and every Christian should remember this to honor his sacrifice.

On one hand where this slanting cross is associated with a deeply religious meaning such as the one mentioned above, there are other believers who take offense in the crucifix being placed sideways. They think of it in this way: Jesus died so that we may have an everlasting life. The Bible says in Mathew 16:24-26, “If anyone would come after me, let him deny himself and take up his cross and follow me.” The sideways placement of the cross seems as if the cross has been laid down, and not taken up (right) as it should ideally be.

Another interesting perception of this design is this―the cross lying horizontally is the Earth that consists of the entire humanity.

The Earth lies in the middle, above hell, and beneath heaven. Both are extreme sides between which the Earth struggles, constantly being pulled towards either direction. Hence, it symbolizes our personal conflict between heaven and hell, good and bad, upliftment and downfall, and right and wrong.

In opposition to this belief, there is a different notion that if we hold the earthly bonds dear; it doesn’t reflect the spirit of a true Christian. According to the Bible, the Earth is our temporary place to stay; it is heaven that is our home, that is the place where we actually belong. Therefore, associating the cross as the Earth is not right.

For those who believe, this interpretation of this jewelry is highly meaningful, as many people who struggle between the inner conflicts of good and evil can associate with this meaning, thus, wearing the sideways cross.

Many people believe that cross symbolizes the resurrection of Jesus and his amazing victory over the ultimate end―death!

He took up the cross and suffered humiliation and death so as to save His people, save us from perishing, and give us an everlasting life. He faced death and conquered it by rising up again, which is why the cross has been laid aside, because its work is over. Therefore, it is a symbol of victory over death.

Skeptics respond to this interpretation by highlighting the fact that Jesus showed us the way and we must follow it. To lay the cross aside would be to not follow His words, which is not what Christianity is about.

Also, the cross (in an upright position) plays a crucial role in Christianity. The notion that the work of the cross has been done is highly unacceptable to its believers, who are expected to take up their cross and follow the footsteps of Jesus to be worthy enough to stay with Him after the end of this mortal life.

Give a thought to it in this way―maybe it is just a fashionable way to place the cross; maybe the design doesn’t really have any meaningful logic behind it. We are humans at the end of the day, the most creative in God’s creation. Perhaps, it is just a creative way to wear an important symbol. Also, you cannot ignore the fact that these stories and real or unreal meanings and beliefs make people more curious about the offbeat design of the necklace, eventually increasing sales of the sellers, and satiating the need to follow the current trends of the buyers. No matter what meaning appealed to you, at the end of the day―it is a cross; nothing more, nothing less.