No matter where we go and what we do, we never tend to abandon our beliefs. Here's a bit about why our beliefs are so important to us and to the world. 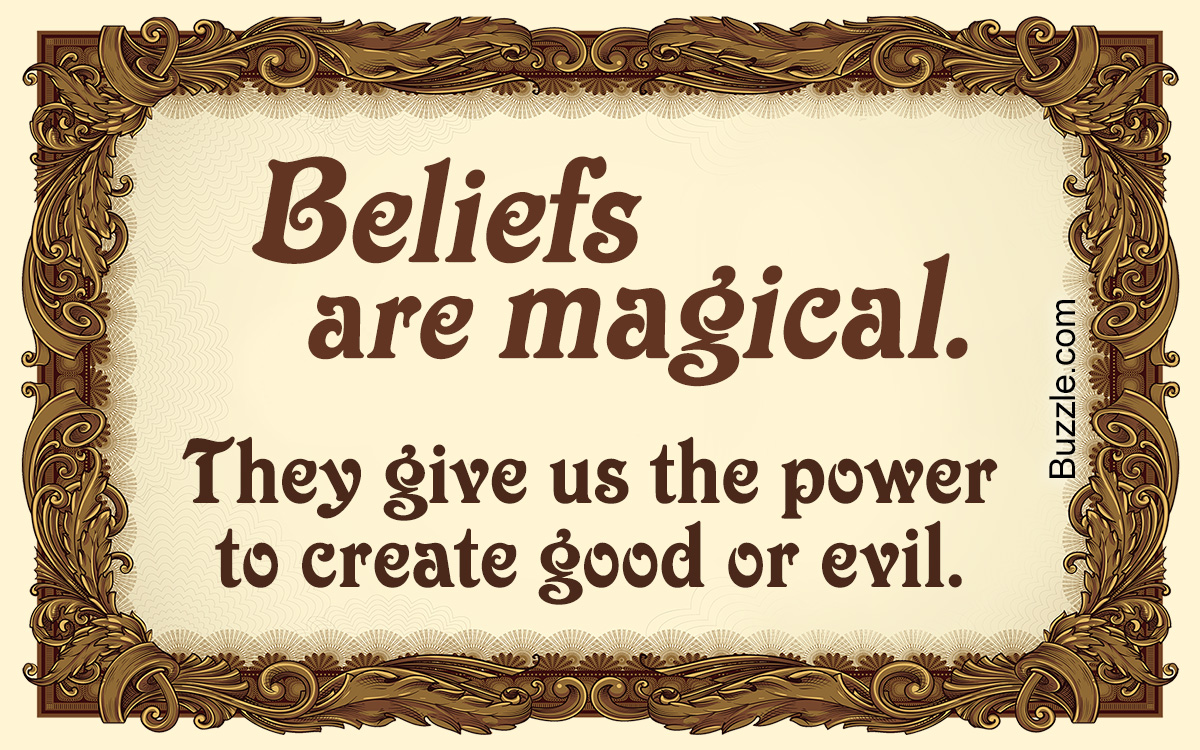 No matter where we go and what we do, we never tend to abandon our beliefs. Here’s a bit about why our beliefs are so important to us and to the world.

Beliefs have the power to create and the power to destroy. Human beings have the awesome ability to take any experience of their lives and create a meaning that disempowers them or one that can literally save their lives.
– Tony Robbins

Right from our early childhood, we grow up believing in something or the other. In certain cases, our beliefs tend to be so strong and staunch that we refuse to budge, come what may. Everything that we believe in may not be actually true, and in several instances, people around us even try to show us the real picture. The fact is, we might take suggestions to avoid any further discussions on the issue. Though, somewhere deep within, we are still extremely reluctant, and most of the time, not willing to let go of our beliefs. This is simply because leaving something that has been influencing our life, all of a sudden, is not easy. Moreover, many times, the mind also refuses to let go what it has been believing in for a long period of time.

Beliefs are a set of values, deeply rooted in the psyche of an individual. They are preconceptions and generalizations regarding some really fundamental issues of one’s life and of the entire world. It is one’s beliefs that determine one’s individual and social behavior to a great extent. These beliefs need not always be in concurrence with the established norms of the society. In fact, they can be completely opposite of what is established. Yet, one may manage to find enough justification for standing by and acting according to them. A person’s beliefs thus, form the very foundation of his/her life.

A man’s moral worth is not measured by what his religious beliefs are but rather by what emotional impulses he has received from Nature during his lifetime”.
– Albert Einstein

There are essentially two kinds of beliefs that may influence the life of an individual in particular, and the flow of society in general. The first is religious beliefs which are established by several religious faiths followed by people. The second is personal beliefs, which an individual cultivates by himself/herself. Religious beliefs are only confined to people who believe or practice a particular faith. On the other hand, every person always has his/her set of personal beliefs whether or not he/she follows a particular religion.

Religious beliefs are essentially derived from values, which are strictly associated with religion. These usually pertain to ideas such as worship, existence, divine intervention, salvation, and morality. In almost all instances, these beliefs are codified, meaning that they are firmly and lawfully established in the religion. Thus, all those who follow that particular religion, are by default, expected to follow the beliefs as well. Needless to say that some of these beliefs are extremely orthodox and stringent in nature. More often than not, they do not correspond with the current needs of society. But, it becomes difficult to discard them as they form the very foundation of religion, and hence, need to be adhered to, no matter what.

On the flip side, are one’s personal beliefs. These, an individual develops within himself/herself through personal experiences and the knowledge that is thus acquired. Contrary to religious beliefs, these are not codified or established by faith. These are the ones which an individual adopts on his/her own, and therefore an urge to stand up for personal beliefs is often found to be stronger in a majority of people than for religious ones. These beliefs may pertain to anything under the sun, and with the exception of certain extreme cases, may also change depending on one’s mindset at a particular point in time.

Religious beliefs have often been criticized by a large number of non-believers, as being immoral, irrational, and even disharmonizing in several instances. Not that personal beliefs are not criticized, but the degree at which they influence society and the world is minuscule in comparison to religious beliefs. Religious beliefs can influence entire communities and nations, and if critics are right, the world might land up in a serious situation.

“Those who don’t believe in magic will never find it.”
– Roald Dahl

Belief is a magical phenomenon that is experienced by every living human. It gives us a power of creation, good or evil. On the surface, it is just an intangible thought that flows through one’s mind; yet, it is much more than that. In times of adversity, what a person believes in, can work wonders for him/her. Our beliefs influence our minds in a certain manner. They make us understand seemingly some of the most difficult things about life and the world around us. The catch here, however, is not understanding, but interpreting those meanings.

Personal interpretations might differ with respect to a given idea or situation and therefore, different people might have different beliefs regarding the same thing. In fact, sometimes, individual interpretations of two people may be completely contrasting with each other, leading to completely opposite beliefs and viewpoints. For instance, of the two given people, one might believe in the institution of marriage, whereas the other may not. The result of these beliefs may be, two, completely contrasting patterns of social behavior, each of which might influence a particular section of society.

Beliefs also, to a large extent, influence one’s morality quotient. What a person believes definitely affects his/her outlook with respect to right and wrong. Beliefs are rarely, and need not be, ‘right’ at all times. More often than not, they do not even have legitimate foundations. Therefore, nobody else, but only an individual may be held responsible for his/her beliefs and what they might yield. Therefore, looking pragmatically at the bigger picture is of utmost importance. The quality of our beliefs determines the kind of person we are, and what we have in store for society and for the world.

At this juncture, it is important to note that one’s beliefs are entirely a question of his/her personal preference. Neither can they be imposed on people, nor can people be forced to abandon their beliefs. No matter how correct or incorrect they are, they are vital to the very existence of an individual, who believes in them.

Beliefs thus, are an inseparable part of our existence. No matter what we might believe in, still, we are all believers. Some of us believe in the presence of God; others believe in His absence. Nevertheless, we believe! And, we are the way we are because we believe in what we believe. Our beliefs can be ‘good’ or they can be ‘bad’, but they always remain with us until we are alive, and continue to color our world, the way we want to see it.