There is a veritable plethora of Greek immortals, each with his/hers own powers. Aries was the God of War, Apollo was the Sun God and a lesser known but important figure was Aeolus, deity of the winds. To learn more about this Greek god, scroll below.

There is a veritable plethora of Greek immortals, each with his/hers own powers. Aries was the God of War, Apollo was the Sun God and a lesser known but important figure was Aeolus, deity of the winds. To learn more about this Greek god, scroll below.

From the mighty Zeus – the lord of the sky to the handsome god of the sun Apollo, Greek mythology is full of gods and goddesses and their stories and tales are fascinating. While some tales like the 25 tasks of Hercules are well-known, lesser known deities are equally interesting. Amongst such lesser beings is Aeolus – Greek god of winds.

The Greek God of Winds

Φ The Greek spelling of his name is Aiolos. Its meaning is quick-moving or nimble.

Φ Aeolus’s actual and true origin as well as his role in Greek mythology is heavily debated. Some experts feel he was a god, others say he was mortal. His parental facts are also a source of confusion. Three main schools of thought exist in this matter:

Φ His numerous mythical origins aside, Aeolus’s actual mates and offspring are also heavily debated. His marriage to Enarete resulted in multiple progeny, of which four: Salmoneus, Cretheus, Athamas and Sisphus are the most prominent. These 4 sons of Aeolus are regarded as the four main founders of the Aeolian race and hence a part of the Greek race itself.

Φ According to Homer, Aeolus had 6 sons and 6 daughters, who were married to each other. Yet another myth specifies that 4 of Aeolus’s sons become the 4 gods or types of wind, mainly the South wind, the North wind, the West wind and the East wind.

Ψ Aeolus was appointed as regent or keeper of the winds by the gods. The mythical island of Aeolia was hollow inside and its numerous caves were the holding areas for the storm winds. It is said that the island floated freely and was surrounded by a wall of bronze, presumably to contain the winds. When commanded by the gods or on their whims, gales, stormy winds, light breezes etc would be released by Aeolus.

Ψ In some tales and stories, Aeolus holds the title of Hippotades (reiner of the horses). The four winds were perceived as mighty horse-formed spirits or beasts and they were controlled and contained solely by Aeolus.

Ψ Aeolus’s fame is majorly due to his part in Homer’s Odyssey. In his struggle to make his way home to his wife, Odysseus was lost at sea and he and his crew land on Aeolus’s island. Aeolus shows them hospitality for 1 month and was quite sympathetic to their plight. To help them, he confined all unfavorable or adverse winds in a bag and gifted Odysseus and his men, the favorable west wind Zephyros, which would safely bear them home. But on-board, while Odysseus was asleep, his sailors suspected him of hoarding riches in the bag and opened it out of curiosity. Alas, the strong and uncontrollable storm winds were unleashed. They melded together to form a powerful storm and took Odysseus’s ship right back to Aeolus’s island. On meeting Odysseus for the second time, Aeolus regarded it as a sign of the God’s Will and refused to help them. Instead he advised them to leave the island and never return.

Ψ Aeolus also features, albeit minimally in the epic Latin tale Aeneid by Virgil. The goddess Juno bears a grudge against Trojan Aeneas and seeks Aeolus’s aid to hinder his journey to Sicily. She tempts him by offering nymph Deiopea as a wife, if Aeolus would free the stormy winds to wreck Aeneas’s fleet. Aeolus agrees and a powerful storm destroys most of Aeneas’s ships.

Unfortunately there are few depictions of Aeolus in art. A few statues or figurines found are not specific to Aeolus himself and can be thought of as generic. A beautiful piece of art is Eugene Delacroix’s Winter – Juno and Aeolus, which depicts Juno seeking Aeolus’ aid. A less visual but symbolic depiction of Aeolus’s power over the plight of sea travelers is Alexandre Jacovleff’s Aeolus. It can be assumed that artwork or depictions in any form of this deity have been lost or destroyed with the passage of time. Aeolus – Greek god of winds, is just one of the many fascinating deities of ancient Greece, each with his/hers own family and legends. 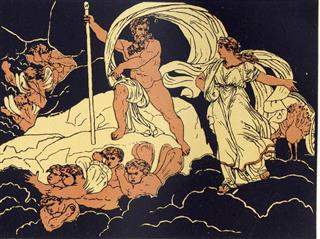 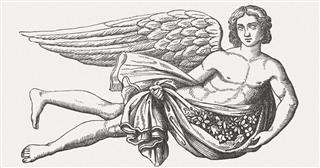 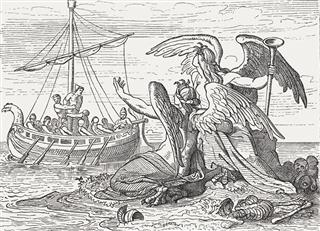 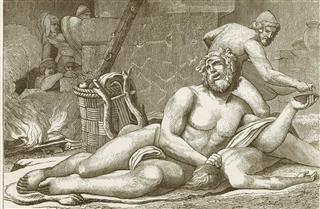