Basic, Core Beliefs on Which the Faith of Hinduism Thrives

Hinduism is considered to be one of the most tolerant religions in the world. One of the basic beliefs of Hinduism entails, attaining 'moksha' from the cycle of rebirth.

Home / Uncategorized / Basic, Core Beliefs on Which the Faith of Hinduism Thrives 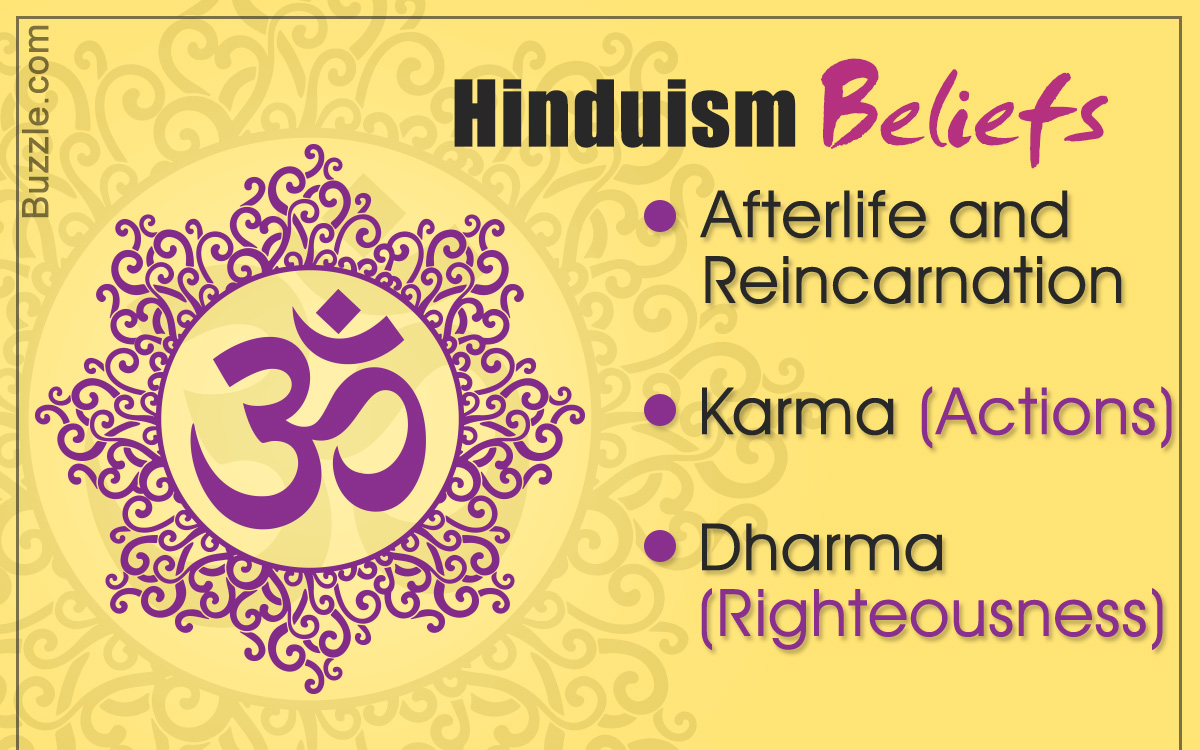 Hinduism is considered to be one of the most tolerant religions in the world. One of the basic beliefs of Hinduism entails, attaining ‘moksha’ from the cycle of rebirth.

Hinduism is not just a faith. It is the union of reason and intuition that cannot be defined but is only to be experienced. Evil and error are not ultimate. There is no Hell, for that means there is a place where God is not, and there are sins which exceed his love. ― Dr. S. Radhakrishnan (A prominent Hindu scholar and second President of India).

Encapsulating the concept and principle beliefs of Hinduism into a definable statement or points is very difficult, as this religion does not have a set of customs or rituals that, if followed, makes a person or individual a Hindu. The first recorded instance of Hinduism-related traditions dates back to the Indus valley civilization during 3300 – 1200 BCE. The word Hindu itself has its origins in the word Indus, and people residing across the Indus were called ‘Hindus’. There is no known founder of Hinduism and this religion and is considered to be one of the oldest living religions of the world. Due to its unclear definition and lack of rigid guidelines, various forms of religious expressions co-exist in Hinduism.

Hinduism is actually a way of life, there are no written rules or book that enlists the way and beliefs of this religion, hence it grants absolute freedom of belief and worship. Hinduism does not believe in blasphemy and heresy. Hindus acknowledge the existence of multiple gods and deities and Hinduism has traditionally been among the world’s most tolerant and inclusive religions. One does not have to be ritualistic in order to be a part of the community.

The sacred texts and spiritual philosophy of Hinduism are incomplete without the mention of afterlife and reincarnation. According to Hinduism, the cosmos and everything in it is an embodiment of infinity, which means nothing really begins or comes to an end. Instead, everything, especially life, exists in phases and cycles. The soul is immortal and its existence is eternal, albeit on different planes and in different forms (or vessels, in case of an earthly or physical existence). Therefore, what we perceive as birth is nothing but the beginning of an existing soul’s journey of an earthly life and death is merely the point of completion, for the soul to move on to another phase of its cosmic existence. Therefore, in accordance to this philosophy of eternal continuity, there has to be an afterlife. Reincarnation, however, is subject to whether or not a soul has achieved the highest levels of enlightenment from its physical existence on Earth. Due to the belief in the immortality of the soul and the eternal nature of the cosmos, Hinduism is known as the Sanatana Dharma, which means ‘eternal religion’.

Newton’s third law of motion – to every action there is always an equal and opposite reaction – draws heavily from the principle of Karma, as put down in the sacred Hindu texts. According to this principle, the actions (or inaction’s) of today determine one’s destiny. Say, for instance, if your car needs repair and you act lazy and keep stalling it, you are bound to face the consequences in the form of a motor breakdown or an accident, sometime or the other in the future. The threefold principle of Wicca (whatever energy/thought you send out into the Universe, the Universe sends back to you threefold) also involves the basic essence of Karma, as does the famous Biblical idiom, “Whatsoever a man soweth, that shall he also reap. “, (Galatians VI, King James Version). The concept of Karma finds mention in almost every religious, philosophical and metaphysical body of work related to Hinduism.

Dharma entails upholding righteousness in both material and spiritual affairs. Dharma can be roughly understood as the natural moral code, which, when diligently followed, ensures justice for all. Leading a life dedicated to the path of Dharma, or righteousness, leads one to fulfill his/her material, emotional, intellectual and spiritual responsibilities in a manner that is free from bias, which is brought on by self-interest. This way, practicing good Dharma invariably leads to good Karma, which makes way for a righteous existence for the follower of Dharmic principles. Accumulation of good Karma in due course of a lifetime is believed to either result in a better life in one’s next birth or Moksha (liberation of the soul from the cycle of birth and death).

Hinduism teaches that all living things are Brahman or the supreme soul, in their core. In other words, all living things are Brahman, or god. Advait Vedant, one of the most prominent theological systems of Hindu philosophy, believes that the Atma or soul and Brahman are one, and enlightenment is attained by becoming tuned-in to the Brahman within. Only then can one obtain release from the circle of life (birth – death – rebirth) attaining Nirvana or moksha. According to classical Hindu thought, objective of life entails the pursuit of four Purusharthas or human aims, viz, Dharma, Artha, Kama, Moksha.

Dharma ursuit of meaning or material and financial prosperity falls under Artha. While Kama involves attainment of human and bodily pleasure. And finally, the outcome and ultimate of all these human goals or objectives is Moksha or liberation from life-death cycle or detachment and renunciation of desires.

Hindus recognize three possible paths to moksha, or salvation. The first is through work or karma yog. This is a very popular way of salvation and lays emphasis on the idea that liberation may be obtained by doing one’s karma or duties thereby overcoming the weight of bad karma one has accrued. The second way of salvation is the way of knowledge, or dnyana yog. The basic premise of this way is that, the cause of our bondage to the cycle of rebirths in this world is ignorance. According to the predominant view among those committed to this way, our ignorance consists of the mistaken belief that we are individual selves, and not one with the ultimate divine reality – Brahman. It is this same ignorance that gives rise to our bad actions, which result in bad karma. Salvation is achieved through attaining a state of consciousness in which we realize our identity with Brahman. This is achieved through deep meditation, often as a part of the discipline of yoga.

The third way of salvation is the way of devotion, or bhakti yog. This is the way most favored by the common people of India. It satisfies the longing for a more emotional and personal approach to religion. It involves the self-surrender to one of the many personal gods and goddesses of Hinduism. Such devotion is expressed through acts of worship, temple rituals, and pilgrimages. The fourth and supposedly difficult path to salvation is through meditation and penance or raj yog All these paths and not exclusive, meaning, following one does not mean one cannot use the other path. All these paths, at some stage and in some form, do intermingle with each other.

Besides certain rituals and customs certain scriptures, or works of literature, are considered to be holy and important references to all Hindus. The Vedas, which are actually not one but four books (Rigveda, Samaveda, Yajurveda, Atharvaveda) are ancients religious texts revealing the eternal truth to humans. Probably the most important scripture or holy book for any Hindu is the Bhagwad Gita. This set of scriptures acts as a spiritual guidance for humanity through the conversation between Krishna and Arjun two characters from the Mahabharat. Though the conversation contains a lot of religious talk, in essence it is a teaching to deliver humans from the darkness of material existence. The Bhagwad Gita or Gita for short is one of the most famous and widely read religious text in India and is also known as the fifth Veda. Another set of religious text that comment on the essence of real knowledge and the basis of Hindu religion is the Upanishads. These scriptures provide the basis for many schools of thought in Hinduism. The Ramayan and Mahabharat are mythological epics that act as a guide to the various challenges and situations in human life through various stories and characters in those stories. The Ramayan and Mahabharat are extremely popular and still followed today by Hindus the world over.

It can be difficult to grasp the essence of Hinduism simply because of varied thoughts and concepts and freedom or lack of set rules that govern this religion. One of the fundamental concepts of Hinduism which makes it so unique is that it accepts that all religions are true and can lead us to salvation. Hinduism also acknowledges that only one path to unveil the divine potential in a human cannot be prescribed to all human beings. Therefore, Hinduism lets you be what you want it to be because your nature of existence is unique and does not make it mandatory for an individual to follow set rules and values. One of the most fascinating aspects of Hinduism is that it is an evolved religion that has been constantly evolving since the last 5000 years, influencing and being influenced by various thoughts, ideas and cultures forever espousing humans to lead a life seeking knowledge and truth thereby attaining true enlightenment.