The Irish poet Oscar Wilde once said, "One can survive everything nowadays, except death." Dying is accepted as a part of life, and when one dies, there are a multitude of rituals and ceremonies that need to be performed. Let's take a look at the various death rituals that the Hindus perform.

The Irish poet Oscar Wilde once said, "One can survive everything nowadays, except death." Dying is accepted as a part of life, and when one dies, there are a multitude of rituals and ceremonies that need to be performed. Let’s take a look at the various death rituals that the Hindus perform.

Hindus, who perform a myriad of rituals in their lifetime, believe that humans are reborn according to their karma, and hence, perform many death rituals to ensure that the soul rests in peace. According to Hindu beliefs, when a person dies, his soul lingers around near the relatives, the body, and his materialistic possessions. They also believe that some rituals need to be performed for the soul to break the bond with the body, and start a new life elsewhere. Often, we wonder why Hindus burn or cremate the body, instead of burying it. The answer lies in the belief that, by burning the body, the soul does not feel the physical association with the body anymore, which it could have, had the body been buried.

The rituals that are performed after the death of a person, are, in a way, a message to the departed soul, indicating that the people miss the departed person, remember his qualities, and are trying to get on with life. Therefore, a lot of religious rituals like prayers, bhajans (religious songs), havans (purifying rituals involving a fire ceremony), etc., are carried out, so that the closure of life for the soul is confirmed.

Hindu death rituals which are followed all over the world are almost similar, and are drawn from the Vedas. All the family members, including the children, take part in the rituals, which are performed with the help of a Hindu priest. An outline of some of these follows:

As Death Approaches
For Hindus, dying at home among loved ones is considered better than dying in a hospital. When death, due to any reason, is inevitable, they bring the dying person home, place him in his room with his head facing the east, and light a lamp near his head. Family members and all the loved ones chant hymns, until the soul of the person departs.

At Death
If the person is unconscious, several mantras (group of words which can create spiritual transformation) are chanted in his left ear. Sandal paste or holy ash is applied to the forehead, and few drops of milk or water of the river Ganges are dribbled into his mouth. The body, after death, is kept with the head facing the south direction. The top of the head and the area under the chin, are tied with a cloth. A Hindu priest is called for the death ceremony. Under a shelter that is built, a fire ritual is performed, which is also known as homa, to bless nine kumbhas (water pots). The chief mourner (the person who leads the fire rites) is the eldest son, in case of a father’s death, and the youngest in case of a mother’s death.

Preparing the Body
The chief mourner is then made to perform some rituals, like arati (a ritual in which light from wicks soaked in purified butter or camphor, is offered to deities), and passes the oil lamp over the body, while offering flowers. The relatives then carry the body back to the porch and cover it with a white cloth. The body is bathed with the water from the nine kumbhas, and placed in a coffin. Women walk around the body offering puffed rice into the mouth, which is to nourish the soul in the journey ahead. The homa, fire ritual, can now be performed at the crematorium.

Cremation
To perform the ritual of cremation, only men go to the crematorium. The clay kumbha and the pot containing the burning homa are carried to the site. The body is removed from the coffin and is carried around the pyre thrice, in a counterclockwise direction. Now, men offer puffed rice, the way women did earlier. The chief mourner, with the clay pot on his shoulders, circles the pyre, while a relative knocks holes in the pot at each round, to let the water pass. This signifies that the soul is leaving the body. After taking the three turns, the mourner lights the pyre without turning to face the body.

Bone-gathering Ceremony
The family returns to the cremation ground after 12 hours to collect the remains (ash and bones) of the body. First, water is sprinkled over the ash, and then the ash is collected in a vessel. Preferably, the ash is offered in the holy river Ganges. If this is not possible, it can be scattered in a water body or any other area as per the wishes of the deceased or immediate family.

Post Cremation: Ritual Impurity
After the cremation ceremony, everyone takes a bath and cleans the house. During these days of ritual impurity, family and close relatives do not visit each others’ houses. They do not attend any marriages, they do not celebrate festivals, nor do they visit temples or priests, for a year.

Memorial Rituals
On the 3rd, 5th, 7th, or 9th day, people gather for a meal, in which the deceased’s favorite food is cooked. The food is first offered to the photo of the deceased person. On the 31st day, a ceremony is held, in which cleaning of the house is required. A Hindu priest is called, who performs the sapindikarana (a rite to mark the transition of the deceased and merging with the ancestors). Once the ritual is finished, the impurity ends. The shraddha rite (carried out so that the deceased soul rests in peace) is performed at the end of the year.

Hindu rituals related to death are many and confusing. The younger generation often do not carry out all of them, but if these steps are followed devotedly, the soul is sure to find peace and a new life after death. 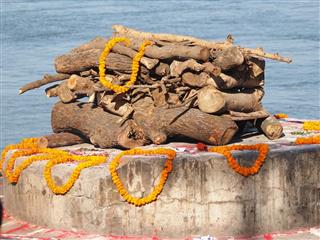 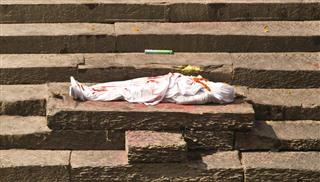 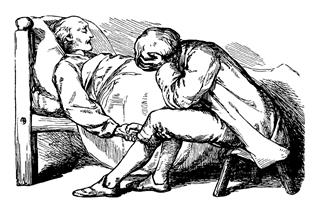