The Powerful Meaning of the Parable and Mustard Seed: Explained

The Parable of the Mustard Seed is a short parable of Jesus Christ, which has been interpreted by many in many ways. This SpiritualRay post explains the meaning of this parable in brief, also noting all the possible deviations in its interpretation.

Home / Uncategorized / The Powerful Meaning of the Parable and Mustard Seed: Explained 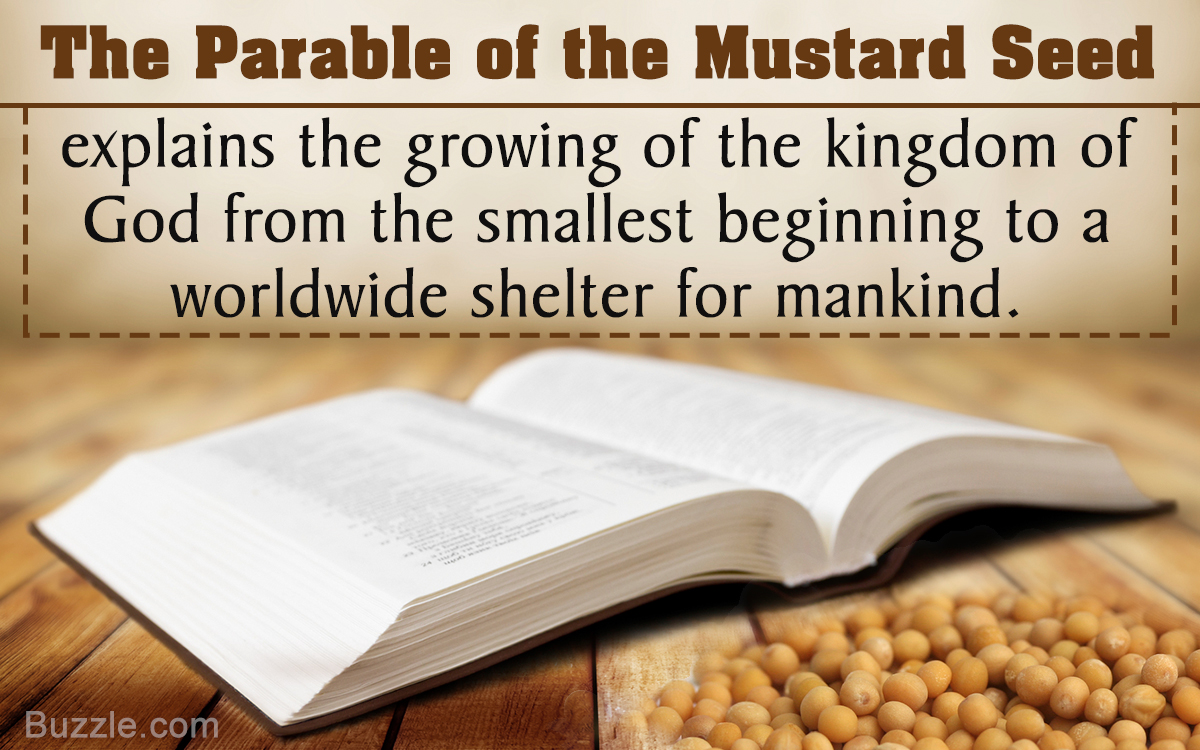 The Parable of the Mustard Seed is a short parable of Jesus Christ, which has been interpreted by many in many ways. This SpiritualRay post explains the meaning of this parable in brief, also noting all the possible deviations in its interpretation.

Jesus has used the example of the mustard seed twice in the Bible. Once in the Parable of the Mustard Seed, and second when He explains about faith. Mathew 17:20 English Standard Version (ESV) states, “Because of your little faith. For truly, I say to you, if you have faith like a grain of mustard seed, you will say to this mountain, ‘Move from here to there,’ and it will move, and nothing will be impossible for you.”

Being the only Son of God, Jesus’ knowledge about all that comprises heaven and earth was infallible. He knew exactly what He had to choose as an example to put forth a spiritual message that is comprehensible by one and all. Speaking of the example of the tiniest of all seeds, the mustard seed, Jesus efficaciously emphasized on the power of small beginnings and how they could turn into manifold growth reaching all throughout the world. Invariably, Jesus taught us all that in order to reach out to far away lands, you must start with a small beginning. The small mustard seed not only emphasizes on the degree of faith in the Lord, but also the power of a little endeavor spreading out to great multitudes.

The Parable of the Mustard Seed

And he said, “With what can we compare the kingdom of God, or what parable shall we use for it? It is like a grain of mustard seed, which, when sown on the ground, is the smallest of all the seeds on earth, yet when it is sown it grows up and becomes larger than all the garden plants and puts out large branches, so that the birds of the air can make nests in its shade.”

He said therefore, “What is the kingdom of God like? And to what shall I compare it? It is like a grain of mustard seed that a man took and sowed in his garden, and it grew and became a tree, and the birds of the air made nests in its branches.”

He put another parable before them, saying, “The kingdom of heaven is like a grain of mustard seed that a man took and sowed in his field. It is the smallest of all seeds, but when it has grown it is larger than all the garden plants and becomes a tree, so that the birds of the air come and make nests in its branches.”

Though the parable is the same, note the slight differences in each of these versions. For instance, while in the Gospel of Mark, it states that the mustard seed “grows up and becomes larger than all the garden plants”, in the Gospels of Luke and Mathew, it says that the mustard seed grows and becomes a tree. Now, in reality a mustard seed cannot grow into a tree, but yes, compared to its tiny size, it does grow to be a large-sized shrub and covers the entire lands extensively. Many scholars have paid far more attention to these minor differences and technicalities, and, in the process, as some experts state, lost the whole point behind what Jesus intended to put across.

Meaning and Explanation of The Parable

As implied earlier, various experts have interpreted this one parable in many ways, with its meaning varying from both positive and negative. For starters, let us begin with the simplistic explanation of this parable.

Jesus began by saying, “With what can we compare the kingdom of God, or what parable shall we use for it? It is like a grain of mustard seed,” So, literary, as it has been written in the Bible, Jesus clearly states that the kingdom of God is like a mustard seed. Although this may not stand true in today’s time, but back then, it was the case. It was only Jesus, who with the help of His twelve disciples held the key to the kingdom of God, or to say, were eligible to be a part of the kingdom of God. As compared to the population worldwide, or only in Israel for that matter, their strength was equivalent to the tiny size of a mustard seed, a grain so small that it was almost difficult to locate it in case it fell on the ground.

He then proceeds, “… when sown on the ground, is the smallest of all the seeds on earth, yet when it is sown it grows up and becomes larger than all the garden plants and puts out large branches,” thus implying the ground to be the people of earth and the sower being none other than Jesus Himself. The Gospel of the kingdom of heaven (the mustard seed) is introduced (sown) to the people of earth (ground). The tiny size of the mustard seed implies the few numbers of the preachers, but when they, with the power of God, did their task to introduce the lost men to the loving and caring shelter of the Father, the word spread throughout the world and became larger than all the other powers in the world (becomes larger than all the garden plants), which is the case now.

The work of Christ and His disciples that started with a small beginning has become a dominating part of the entire world, and has paved way for many people to take refuge or shelter in the kingdom of God which is symbolic of the Church. The parable states, “when it has grown it is larger than all the garden plants and becomes a tree, so that the birds of the air come and make nests in its branches.” This only implies that the kingdom of God has room for one and all, enough for all of us to build our safe haven in its branches and thrive under its shelter.

In order to conclude what this parable truly meant, let us read the following excerpt that has been taken from R. C. Trench, Notes On The Parables Of Our Lord:

“The Son of Man grew up in a despised province; he did not appear in public until his thirtieth year; then taught for two or three years in neighboring villages, and occasionally at Jerusalem; made a few converts, chiefly among the poor and unlearned; and then falling into the hands of his enemies, died the shameful death of the cross; such, and so slight, was the commencement of the universal kingdom of God.”

This excerpt beautifully explains the “small beginning” which the mustard seed is symbolic of. Jesus started out with a handful of followers, each spreading out the word and touching the lives of those who were willing to hear. It was from this small beginning that the kingdom of God, the Church, the followers of Christ have spread throughout in massive numbers. Therefore, this parable explains the growing of the kingdom of God from the smallest beginning to a worldwide shelter for mankind.

✞ Some interpreters try to connect the previous parable―The Parable of the Sower―with this, believing that all the parables spoken by Jesus were linked together to bring forth one substantial meaning. The Parable of the Sower in Mathew 13:3-9, English Standard Version, states, “And he told them many things in parables, saying: ‘A sower went out to sow. And as he sowed, some seeds fell along the path, and the birds came and devoured them. Other seeds fell on rocky ground, where they did not have much soil, and immediately they sprang up, since they had no depth of soil, but when the sun rose they were scorched. And since they had no root, they withered away. Other seeds fell among thorns, and the thorns grew up and choked them. Other seeds fell on good soil and produced grain, some a hundredfold, some sixty, some thirty. He who has ears, let him hear.'”

There are some experts who link the two parables together, therefore, bringing about a completely different symbolism of what Jesus said. According to their understanding, the birds in the Parable of the Mustard Seed, just like the Parable of the Sower, refers to the evil that comes and devours the word of God sown in our hearts (seed). They also suggest that the birds that take refuge in the tree are no one else but sinners, false teachers, and agents of the Devil who dwell within the good only to make the believers weak and keep them distracted.

✞ There has also been some criticism regarding Jesus’ choice of citing an example of the mustard seed, which doesn’t grow up into a tree at all. On this note, there have been interpretations that perhaps Jesus meant that the word of God has the power to change the nature of our hearts. While we expected the seed to grow into a shrub, it in fact, flourished in such a way that it grew up to become a strong and mighty tree rather than a delicate shrub. Possibly, Jesus was directing on the powers that the kingdom of God possesses, the miraculous strength it can give its people.

Because there is no sure way to judge as to which interpretation is correct and which is not, we tend to accept what we wish to accept, and reject which we don’t. However, a simplistic approach towards things is the right way of understanding them. As far as this parable is concerned, let us remember the one who delivered it, our very own Savior, Lord Jesus Christ. An epitome of simplicity, love, and mercy. If we keep Him in mind in all our ways, He will guide us all towards the right understanding of everything we come across. Amen.