Sculpture of Nike of Samothrace

The headless statue of the Nike of Samothrace with her wings outstretched, and folds of garment billowing in the strong gusts of sea breeze, is a fine example of Hellenistic art. Right since it was installed in Louvre, France, in 1884, it has been inspiring awe both in the critics of art as well the spectators.

The headless statue of the Nike of Samothrace with her wings outstretched, and folds of garment billowing in the strong gusts of sea breeze, is a fine example of Hellenistic art. Right since it was installed in Louvre, France, in 1884, it has been inspiring awe both in the critics of art as well the spectators.

The island of Samothrace, in North Aegean, has for long fascinated man because of its association with the enigmatic Cult of the Great Gods. It contains the Samothrace Temple Complex that was devoted to the deities of the pantheon of Great Gods, that predates the arrival of Greeks on the island in 7th century B.C. It was the result of this continued interest of the historians and archaeologists, that the Nike of Samothrace, also known as the Winged Victory of Samothrace, was discovered by the French consul and archaeologist Charles Champoiseau in 1863.

Nike has been celebrated as the Goddess of triumph and contest throughout ancient Greek mythology. She is the daughter of Pallas (Titan) and Styx (Water) and the sister of Zelus, Cretus and Bia. She along with her siblings were regarded as the attendants of Zeus, when the Greeks placed him at the helm of the pantheon of their Gods. She is also depicted as the goddess of war standing beside Zeus and as goddess of victory she is often seen honoring the winner with a wreath.

An Impressive Piece of Art

The Nike statue is a marble statue, the Greek goddess of Victory, who is depicted as a winged woman standing on the prow of a ship, braced against strong winds of the sea. It was found standing on a rock niche overlooking the theater of Sanctuary of the Great Gods in Samothrace. Though the statue is significantly damaged, it is considered to be an excellent example of Hellenistic sculpture.

The Hellenistic effect is evident from the folds of transparent clothes that are seen pressed against the body of the goddess, and rippling against the strong winds as she appears to be descending from the heaven with her wings flapping in the air. The slightly twisted body with outspread wings and the billowing garments create a spiraling effect that is so true to the spirit of the Hellenistic sculpture. The Nike along with Venus de Milo is considered to be a fine example of ancient Greek sculpture that is known for its naturalism and the fine rendering of garments on human bodies that show suppleness of the form.

The statue is believed to have been erected to commemorate the victory of the Rhodians at Side against Antiochus of Syria in 190 B.C. Although no one knows about the sculptor of this masterpiece, it is believed that he was a Rhodian. The type of ship depicted, the gray marble used to make the bow and the mention of the word ‘Rhodios’ at the base of the statue hints at its Rhodian origin. However, some believe that it was an offering made to the gods by the Macedonian general Demetrius I Poliorcetes after his naval victory at Cyprus but then this would date the statue to an even earlier period, sometime between 295 B.C. and 289 B.C.

Since its discovery, parts of the statue have been unearthed and the statue has been rebuilt. However, the statue still has its head and arms missing. In spite of being incomplete, it is considered as one of the greatest surviving masterpieces of its times. It is one of the most prized possessions of the Louvre in Paris, the national museum of France, and is placed at the head of the Daru staircase which gives a dramatic effect to the sweeping flights of stairs. 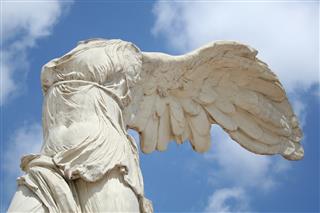 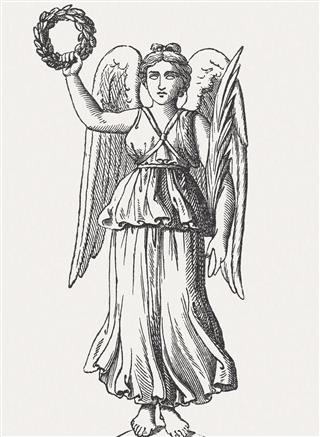