Understanding the Basic Difference Between Knowledge and Belief

Home / Uncategorized / Understanding the Basic Difference Between Knowledge and Belief 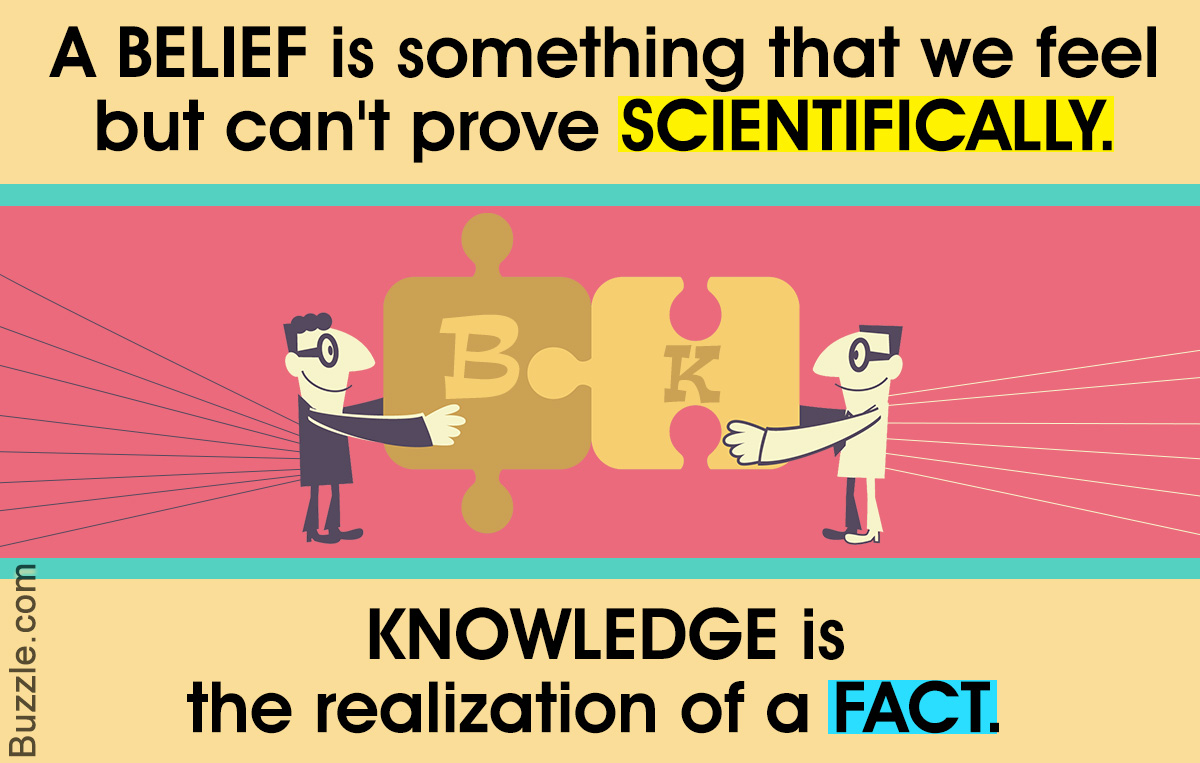 There is a whole lot of information available on the Internet. Hence it is not uncommon for us to go and Google something that intrigues us. I am guessing you did the same before you landed on this page. Now, based on the kind of experiences and associations we have with the whole concept of ‘finding answers on the Internet’, we either believe that we will get the answers we are looking for, or we believe that we won’t. But can we know for sure?

This is the crux of the difference between knowledge and belief. You believe in something; but you may or may not know it to be a fact. Knowledge vs. belief is too vast a topic to cover in a few hundred or thousand words, but I will try to.

Let us first try to understand what philosophers have said about knowledge and belief.

G. E. Moore’s concept – known as Moore’s Paradox – also put the definition of knowledge to test. Moore’s paradox elicits how it is sometimes difficult to assert two statements at a time. For example, you may at some point of time have a justifiable belief that the bus you take to college will be late. And you may also have a justifiable belief that you are going to reach college on time. Now consider that the bus did arrive late, but you met a friend who took you along. So the conjunction of your beliefs has turned out to be true (i.e. the bus really was late, like you believed, but you also reached college on time, like you believed). However, will it not sound absurd to assert the two beliefs in conjunction? “The bus will arrive late, but I will reach college on time.” The two statements seem contradictory, but both can be justifiable beliefs that actually turn true. Then why is it difficult to assert so?

Knowledge vs. Belief – The Real Picture

Having taken into consideration two radically opposite points of view on knowledge, let us try to look at the two concepts separately.

Knowledge is the realization of a fact. You may come to know about things through various mediums – books, Internet, education or experience. Going back to the definition of knowledge as justified true belief, we know something to be true (or to be a fact) if we can verify it. Experience is something we rely on, the most, to verify our knowledge. It works most of the time. You can support knowledge and verify it using experimental or statistical data. This is also why knowledge can be ‘proven’ to be wrong.

While knowledge is regarded tangible, belief is a psychological state. This itself makes the whole concept vulnerable to strong debates and accusations. A belief is not something that can be seen, heard, smelled, tasted or touched. It is all in the mind; something that we all feel but cannot prove by the scientific method.

Beliefs are of two main types – commendatory beliefs (belief in ability, for example, “I believe I am a good writer.”) and existential claim beliefs (belief in the existence of something, for example “I believe in God.”) While commendatory beliefs are held by most people as essential, beliefs related to existential claims are a topic of much debate.

Knowledge and Belief: How are they Different?

Knowledge is indispensable, yes. However, belief is equally important. A simple example – if I do not believe that a tablet of an analgesic will take care of my headache, I will never test my belief. Hence I may never know for a fact that an analgesic actually does relieve headache. However, even if I don’t believe, it does not change the fact that analgesic tablets do relieve headaches. In this sense, knowledge is not based on belief. However, the more you can base your belief with fact, the stronger your belief will become. (or in turn, the lesser facts you find to base your belief on, the weaker it will become). Hence belief is affected by the knowledge you have.

The biggest difference between belief and knowledge is – it is the tendency of most people to test their beliefs and not their knowledge. When we are sure we know something, we do not really go back and try to verify it. We tend to accept our knowledge more readily than our beliefs. Our beliefs, however, are constantly put to test; by us, by people around, by situations, experiences among many other things.

(Disclaimer: Before I begin, I would like to say that following are my concepts about the difference between knowledge and belief. They may not be in complete accordance with what you know or believe. My intention here is to only give you a complete picture from my point-of-view, so that it triggers you to test the two concepts yourself.)

However, knowledge is not universal, for something that is justified to me need not be justified to you; something that is verifiable for me need not be verifiable for you. For example, I have seen and tasted a donut before, so I can verify if an unknown eatable placed in front of me is a donut or not. But if you have never heard of, seen or tasted a donut before, any unknown eatable could pass as ‘donut’ for you. Another example – if you show a red apple to a colorblind man and ask him what color it is, he will say the apple is gray. That is his fact, his reality, his knowledge. It is not ‘false’ (for the apple does really look gray to him), but it is not true either. (For we all know apples are not gray in color). Hence, from the definition of knowledge given by Plato, knowledge is subject to perception as well.

In short; lack of knowledge leads to formation of beliefs. However, other things like culture, religious teachings, upbringing, experiences, etc. also contribute to the belief formed. (Simple example – we all have inadequate information about ‘God’ – but we all don’t have the same beliefs about God.) Increasing your knowledge about something will alter your beliefs about it. But your beliefs won’t alter your knowledge. In spite of this, the act of ‘believing’ in itself is indispensable, as you need to believe in what you know, to realize that it is knowledge. According to me, one should not try to eliminate either of knowledge or belief from one’s life. Both are necessary, important and functional. Just imagine, if we didn’t have such a thing as belief, we wouldn’t be able to live! I am going to live for another 60 years at least, I believe. But who knows? Tomorrow, I might die in a freak accident! (Knock on wood.) But I choose to believe I am going to live, and that allows me to go on living, planning for a future. Consciously, subconsciously, we are all keeping belief – in people, in situations, in ourselves. Belief is what keeps us going. After all, knowledge was, is, and will always be incomplete. All that we can hold on to and depend on, are our beliefs.